Many computer systems only use fractional amounts of their processing power and resources when implemented on bare metal. By virtualizing operating systems, the full capacity of machines can be utilized as hardware resources are allocated to multiple virtual machines running in parallel on one physical system. Using virtualization to consolidate systems helps conserve resources, decrease waste, and reduce hardware and energy costs. Consolidation through virtualization also offers increased security because each virtual machine can be easily monitored and isolated from other parts of the system. 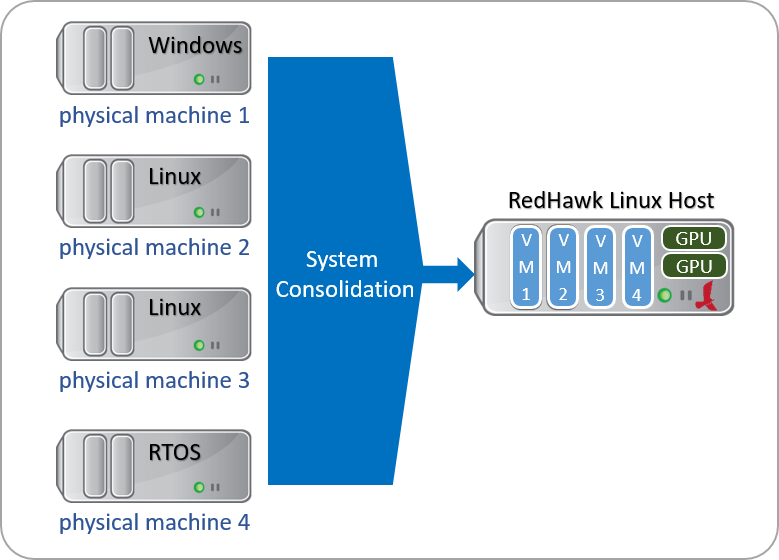 All components of a virtual machine are enclosed in a set of files that keeps the VM separate from the host and other VMs. Because a VM is independently set apart in this way, it can serve as an ideal location for a production environment to test software applications in development. Trial runs of software, operating systems, pages or applications that can result in system crashes or exposure to malicious threats will have no impact on elements outside of a single virtual machine.

Legacy software applications and phased-out operating systems may have difficulty running on newer hardware. Some legacy OS’s are supported as real-time virtual machines, which permit applications to run as if they were on bare metal hardware.

Dedicated systems may have singular purposes and only carry out specific processes for security or networking. These dedicated systems can be migrated as virtual machines onto newer hardware, the latter of which contains more resources than are needed for a single system’s specific processes. Overall, independent machines can be consolidated while maintaining a high degree of independence, performance, and security.

Virtual systems can serve as a convenient way to create backup copies of operating systems that are safely sandboxed from other operating systems, including the hosts. The virtual mobility of VMs also makes them and their associated data and programs easy to migrate from one storage location or host to another.

During first-time configurations for VMs, most VMMs default to a CPU topology with many sockets and a single core per socket. This may result in sub-optimal performance. To improve real-time performance, the
tool allows for the modification of CPU topology to one socket with multiple cores. Furthermore, the KVM-RT Configuration Tool carries out a diverse range of scheduling, monitoring and operational tasks that increase security and help the hypervisor and VMs achieve fast, reliable performance.

The KVM-RT Configuration Tool boots and shuts down the virtual machines, with the ability to scale and support multiple real-time and non-real-time VMs. The tool also provides a transparent picture of the environment, which consists of the hypervisor and virtual OS, and it monitors the VMs to ensure real-time performance. The NightStar tools running on the RedHawk Linux host support tracing and debugging of both the hypervisor and VMs, providing insights to tune and allow users to improve system performance. In addition, Concurrent Real-Time offers guaranteed event response time of less than 10 microseconds when running real-time VMs alongside non-real-time VMs on certified platforms.